This building was experiencing significant water penetration due to the surface of the ground being sloped towards the building and from a constant flow of groundwater deep in the ground. The only proper solution was a full-depth excavation and exterior French drain. 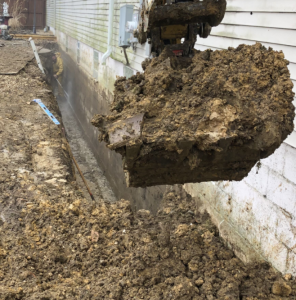 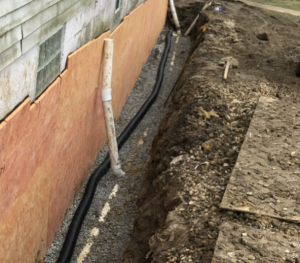 Isbir Construction and Landscape excavated to below the footing along the entire left side of the building and then power washed the foundation. After the soil was removed from the foundation, several cracks were found and may mortar joints had lost their mortar. This damage was re-pointed before waterproofing. Isbir also found several old damaged French drains and terra cotta pipes that were seeping water next to the foundation during the excavation phase. Isbir connected them into a new solid pipe draining to the front of the building to eliminate the water sources. Isbir then waterproofed the foundation with a hot-applied waterproofing membrane and covered it with a protective insulating board. 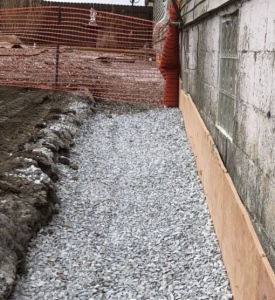 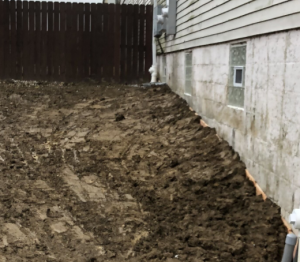 A 4” perforated pipe at the bottom of the excavation was encased in the gravel. This way, any water that still makes it into the area will drop through the gravel and get caught in the perforated French drain pipe that also drains from the front of the building.

After only a day or two of having the waterproofing membrane applied to the foundation, the interior blocks in the basement started to dry up and the basement has experienced no water problems since the full depth exterior French drain project was installed. 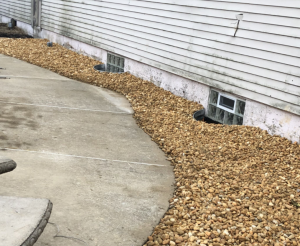 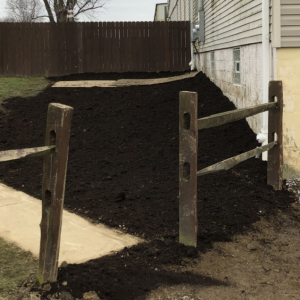 Matt Kovell
01:08 28 Jul 21
The Isbir construction crew did an amazing job creating our outdoor living space that we absolutely love! Mike as well... as his entire crew were very professional! From our first phone call with Isbir until the very last day completing the project we were included in every single step, whether it was morning pre-construction meetings, emails, phone calls, or real time approval of their work! We highly recommend Isbir construction and wouldn’t hesitate to hire them for future projects!read more

Paula Witkowski
15:57 24 Jul 21
This is my third large project with Mike and his team. Prior jobs involved exterior french drains and decorative... landscaping. This time they replaced my patio and sidewalks. The team is always professional and they do quality work. Mike and his foreman Mark are very experienced and really care that the job is done well. I never hesitate to recommend them.read more

Nicholas Kuhn
21:02 23 Jul 21
These guys are very thorough and professional. I appreciated the management of the project and extensive communication... throughout the bidding process. They had to come back twice and the same team leader came back the second time, and knew exactly the situation. I highly recommend this firm.read more

Sean Butler
23:06 29 Apr 21
Mike runs a professional outfit and his attention to detail is second to none. He is able to do what other contractors... are not willing or not able to do. I was impressed with the speed of the project and the no-nonsense approach he took.read more

Philip Martell
18:50 13 Apr 21
Isbir Construction was the most professional organization we have ever did a project with. The job they did was... fantastic and organized beyond belief. Communication by Isbir team members was outstanding and nothing was ever in doubt. We would gladly hire them for any projects in the futureread more

Cindy Opfer
13:42 07 Apr 21
I am sorry to have missed you as well, but we were very happy to work with Mike.I have sent a note to him. The project... was done VERY professionally and efficiently and people have already told us how good it looks. Thank you, Isbir!read more

CBP DEF
15:48 05 Apr 21
Installed French drain around the front of my house and front porch, regraded yard away from house towards driveway... retaining wall, rerouted underground drain to driveway downspout. Really enjoyed working with Mike Isbir and his team. Professional, friendly from answering my first call, phone consultation with Mike, on-site evaluation, through the crew that did the work. Prompt, organized, thorough clean-up. Highly recommend.read more

Connor Grieb
15:53 24 Feb 21
Working with Mike and the Isbir team has been awesome! Communication has been very helpful and has kept us all on the... same page throughout each of the projects we have worked on together. Our family highly recommends Isbir Construction & Landscape!read more

B Kern
17:40 10 Feb 21
Mike Isbir did a great job explaining what to expect once the job began. He & his team did a great job of answering my... questions as well as communicating any issues that arose. The crew did a wonderful job on my retaining wall, new steps, sidewalk & driveway extension. It looks wonderful. I would definitely recommend Isbir Construction.read more

Table_ Smasher
22:11 01 Jan 21
They don't offer a guarantee on anything. I'm still getting water in my basement occasionally after having them come... and do work.read more

Kay Balderose
21:03 14 Dec 20
Isbir construction came and built us a new walkway and drain at the back entrance to our house. Before, when there was... heavy rain the water would pour down the basement stairs like Niagara Falls! I took a short video to show I am not exaggerating! Their men came and measured, excavated, removed all the buried slate pavement stones they uncovered, installed a new drain, sloped the beautiful aggregate paving to the new drain, even fixed the low retaining wall along the border of my garden. We are delighted! I even point out the new walkway to visitors to be sure they notice. We have not had any more rain in the basement. here are some before and after pictures.read more

William Weaver
18:46 06 Dec 20
I purchased a new home and had a leak in the basement. About 1/2 gallon of water for every significant rainfall. I... called one company and they immediately wanted to install new basement windows. I called another and they wanted to schedule me and my wife, a month ahead of time, for a 2 hour analysis and "presentation" of the solution (which is probably the same expensive solution they pitch to everyone - and, oh, they have financing also). Another company wouldn't return my phone calls. Then I found Mike at Isbir Construction - what a breath of fresh air. Mike spoke to me on the phone and we scheduled an appointment within a very reasonable period of time. When Mike came out, he did a thorough review of the property and the problem. He was trying to drill down the "root cause" and make a "data driven decision." He recommended a firm which could "scope" the rainwater runoff pipes around the property. After the scoping and review of the video, Mike recommended repair of an underground runoff pipe which was in nearly the exact location where the water was coming into the basement. The Isbir team, led by Mark who is awesome, showed up when they said they would and was very conscious about not disrupting the neighbors next door (they asked them to move their car to insure there would be no accidental damage while digging). They were fast and when they reached the pipe, they indicated it was "all smashed up." They quickly repaired the pipe and took pictures of the work as they went along. They even cleaned up after themselves and brushed off the next door neighbor's driveway which was adjacent to the job site. They were quick and left the area the way the found it. although, of course, you could see where they were digging. Even when I had a concern about the work, they responded immediately and provided a thorough explanation of what was done. My concern was clearly unfounded and they worked hard to help me understand what was done. Everyone I spoke to at Isbir was personable and went out of their way to help me and to solve the problem rather than try to "sell me stuff." I even had a project manager assigned to me, TJ, who reached out ahead of time to explain what they were going to do and he indicated he would be my contact person. I appreciated their engineering, analytical based approach to the problem and solution. I really had a great experience with Isbir and would definitely hire them again.read more

Nate Natale
19:02 03 Aug 20
If you live at the bottom a combination of slopes and hills, or maybe in a bowl, in Western PA like we do, then you... might know the fear that comes with wondering “will this be the time our house floods?” We talked to landscapers and we talked to plumbers (multiple)- and they all had different suggestions for dealing with our problem- and none of them felt right until we talked to Isber Construction and Landscape. Mike approached our estimate (and then project) from a holistic perspective that allowed us to see how a number of bad decisions by previous owners, along with our geography, lead to our issues. As an aside- if you aren’t familiar with the difference between ground and surface water, and the limitations of the French drain, check out their video on the subject. Isber brands themselves as “drainage specialists” and that is a spot on description and what separates them from the others we talked to about our problems. Everything they did was designed to move water away from our house via an existing drain in the yard and a new drain in our driveway- and we see the results every time it rains. Part of our project was a concrete driveway that replaced asphalt. The concrete allowed the crew (Sean is the lead, he’s great) to manipulate the surface to push all the water to the new drain in the driveway. As a backup for a catastrophic weather event, the back of the driveway is an inch lower to make sure any overflow drains to the yard, not back to the house. This is called a “weir”, which I had never heard of before. They also installed a new, and re-slopped patio under our deck that also pushes the water away from the house. They put in a beautiful new retaining wall along the patio They also re-slopped the entire yard, replacing the lawn, away from the house and created a swale to move the water to the yard drain. Mike and his entire team (Mark- the crew lead was tremendous) were incredibly professional and efficient. Throughout the whole process we felt that we were in good, capable hands. This was a massive project for us and if you are looking to do it on the cheap, Isber might not be for you (I believe they are very up front about this!). But if a project is important enough to the life of your home as what we did was, I would suggest putting quality above price and go with Isber.read more

Zena Szwalek
21:13 23 Jun 20
Isbir Construction and Landscape did a great job on our property. I’m so happy that I found out about them through a... neighbor. They re very professional and detail oriented with the manner in which they conduct business and their work is meticulous. Very pleased with the job. Thank you people from Isbir.read more

Todd Potts
19:35 27 Mar 20
I used Isbir Construction & Landscape for the installation of a new concrete driveway. My home sits up on a pretty... substantial hill and the job required considerable skill and expertise. Mike, Mark and the crew did an amazing job. The crew was on time each and every day; Mike was out daily to touch base; and the job site was always left clean and tidy. Isbir Construction may be a little pricier than others, but in this case you really do get what you pay for. I wouldn't hesitate to use them again as they were true professionals in all aspects.read more
Next Reviews
Office Hours
Monday - Friday
9:00am - 5:00pm